Bitcoin, the dormant digital currency, has recently gone wild, with prices soaring above $20,000 by the end of 2020. 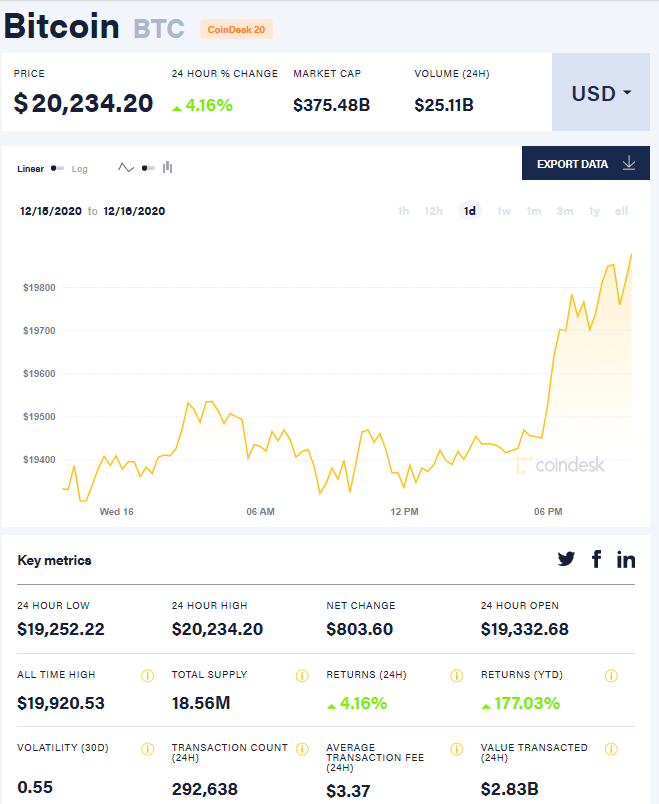 What gives Bitcoin such a shot in the arm? Is risk brewing in the future, and will it spread to China?

The rally “crazy mode” is back on

Today’s frenzied moves evoke memories of traders who have bought and sold bitcoin. Starting in November 2017, the price of Bitcoin went higher and finally reached a peak on December 17.

The astonishing rise has driven millions crazy and created huge risks. Then regulators stepped in to prevent the spread of risk, and the profiteers cashed in and left. The edifice collapsed, dropping 70% in just two months.

"The price of Bitcoin is very volatile, so it has not been an effective payment tool."Bitcoin rose as high as about $19,400 on Nov. 24, then fell to around $16,300 two days later, up or down more than 11 percent in one day. After the introduction of contract trading to leverage the capital, the sharp rise and fall even more crazy.

In fact, the controversy surrounding Bitcoin never stops. Some see the blockchain technology and decentralisation behind Bitcoin as subversive. Others argue that Bitcoin is “air” and has no value at all. The volatility of its price and its technical design make it unsuitable for global circulation. But as “digital gold” storage, has begun to be recognized by some institutions and individuals.

The participation of overseas institutions has been an important driving force

Why the recent explosion of long-dormant Bitcoin? In the eyes of analysts, there are early signs.In May, output halved from the total limit of 21m bitcoins.Apart from the immediate halving, one direct driver of the rally compared with the past has been the entry of overseas institutions.

The global spread of the epidemic has increased risk aversion, and Bitcoin is being used as an investment. “The outbreak has caused many technology assets to soar, and bitcoin has been favored and allocated by some people.” Another important indicator, teta, the key to buying digital currencies such as Bitcoin, has seen its market value soar to $17 billion from about $4 billion at the start of the year, reflecting strong demand.

After the price rose sharply, the market began to move. A major international trading platform has suspended new margin trading and will end margin trading altogether under new US regulatory rules, causing some market panic. Multiple factors add up, and Bitcoin enters a volatile range at high levels.

It has been nearly 12 years since the birth of Bitcoin, during which time people gradually saw the potential of blockchain technology. Technological progress and regulatory escort went hand in hand. I hope that the advantages of the blockchain, such as its consensus algorithm and decentralized governance mechanism, will be fully released. When blockchain technology makes the world a better place, people may not just focus on the rise and fall of digital currency prices.