Musk blows up the crypto world! Tesla is expected to accept bitcoin as payment, as the price of the digital currency hits another record high

Elon Musk is blowing up the cryptocurrency world again.

According to Bloomberg, Tesla disclosed in its latest filing with the US Securities and Exchange Commission on Monday that it expects to begin accepting bitcoin as a form of payment product in the near future, making it the first major automaker to accept bitcoin for payment.

In addition, Tesla has already purchased $1.5 billion in bitcoin and will likely invest some of that cash in alternative reserve assets, including digital assets, gold and gold ETFs.

The SEC in the original
As of press time, the price of bitcoin has broken through $44,000 on various exchanges, surpassing the high of $41,900 set in early January this year. The price has hit a new record high, up nearly 15% in 24 hours.

According to AssetDash, the current market value of Bitcoin is about $816.23 billion, surpassing the market value of social networking giant Facebook, which was valued at about $763.46 billion at the close of trading on February 5.

According to Coin data, in the past half an hour, a total of 377 million dollars, 18,365 people exploded. As Bitcoin soared, several users reported to the JieBing News that a header exchange had been stalled for about 10 minutes.

Xu Tong of Huobi Research Institute said to Jiemian News: “BTC coins hit a new record high, the founder of Tesla Musk has contributed a lot. Musk himself has a strong call ability, this series of practices and enhance the market’s confidence in BTC as a mainstream investment asset and payment method, BTC can break through the previous high is reasonable.” As for Tesla’s move, some netizens commented that it was “the most powerful KOL in the universe, with a clear sign calling the order”.

Tesla’s move to invest in bitcoin has been seen as a pre-emptive move by Musk. In a December exchange on Twitter, Musk asked Michael Saylor, a major digital currency promoter, about the possibility of converting Tesla’s balance sheet into bitcoin. Michael Thaler advised Musk to shift Tesla’s balance sheet from dollars to bitcoin, arguing that it would be a huge benefit to shareholders.

Musk has been a frequent presence in the crypto world, and has recently mentioned bitcoin and Dogecoin on Twitter, causing price shocks.

On the same day, just as US retail investors from the popular Reddit community were being affected by brokerage restrictions, the new battlefield from GME to Doge (Doge), Musk tweeted a dog magazine cover and put it at the top, which helped Dogecoin hit an all-time high.

On the afternoon of February 4th, I sent multiple tweets to mention DOGE, and DOGE exploded for a short time with the highest increase of over 70% within the day. Now, DOGE’s market value has ranked among the top seven. 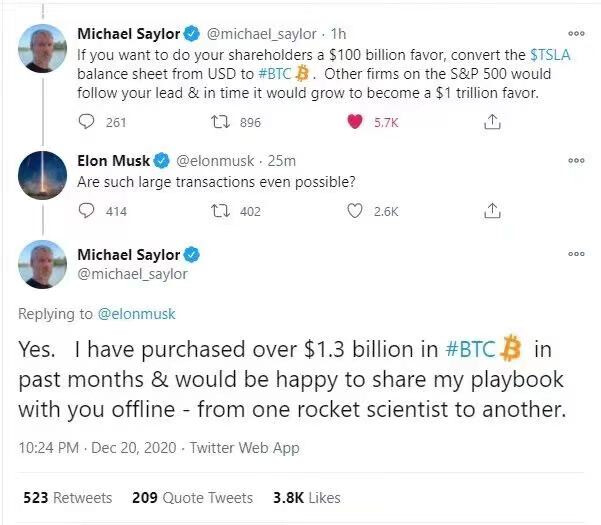